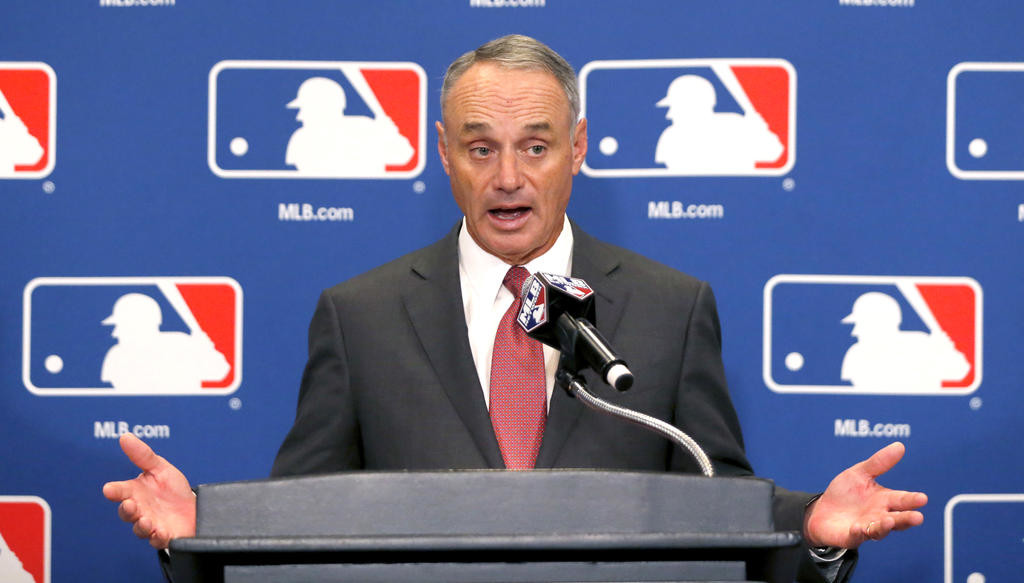 There's really no other way to put it. Negotiations between the MLB and the Players Association remind me of my first fantasy league when I tried to make 90 different offers to acquire Adrian Peterson, but the other team kept declining because I essentially proposed the same deal every time. There's a better chance that David Ortiz comes out of retirement to play OL for Tampa Bay before we see an MLB season. I don't say this to be smug. I am the world's biggest baseball fan, but my God is this a mess. Minor league players are being cut, the players association is furious, fans are missing out on their favorite sport, we may never get to see Mookie Betts in a Dodgers' uniform, (Okay, that one isn't so bad), and these negotiations could continue longer than an NFL Pass Interference review.

The big question: Will the MLB Players Association come to an agreement with the MLB or will the negotiations continue into 2021?

Related: The NBA is Returning…and we’re going to Disney World!

As other leagues are beginning their training and already have a start date planned, Major League Baseball has been nothing short of an ugly divorced couple fighting over who keeps the couch. The MLB has lowballed players with their offers – to the point where players have come out to say that they are genuinely offended by what's being proposed in negotiations. You hate to see billionaire owners and agents (Yes, you, Boras) try to take advantage of the situation to pump up their pockets, rather than give us all what we want. These minor leaguers have been working their asses off since middle school to get to this point - just let 'em play Fred Wilpon! Let's take a look at some of the offers that the MLB has proposed over the last month or so, and examine the losses each player would be taking by accepting any of these outrageous deals:

May 26: The MLB proposes an 82 game season with a sliding salary scale. (Example: If you're only making around $4M, you'd end up making $1-1.5M. If you're Bryce Harper making around $30M, you'd now be making roughly $6.5M.) The big fish get hurt more, but players are losing significant amounts of money either way.

June 8: This one was my personal favorite. The MLB offered a 76 game season with a 75% prorated salary! That would mean the players would make 75% of what they'd normally be owed per game. Why on Earth would the MLB offer this if the players weren't intrigued by a full prorated salary? Maybe Manfred got his hands on some LSD. Maybe he's preoccupied with finally investigating the Yankees. I really don't know at this point but it's ridiculous.

Actually, if you break it down, each offer results in MLB players making roughly 33% of their normal salaries under any of those deals. So, congratulations to the guy in the MLB front office who basically offered the same deal to the players in three different fancy ways. You just gotta be better than that.

A Big Fat NO

I don't think Bill O'Brien would accept any of these deals, and the MLB and the Players Association didn't either. There is so much that goes into this. The season is long, meaning players would spend time away from their families during a worldwide pandemic. Why would they want to take a pay cut for that? There are players who would be risking their health and leaving behind their families and friends for months to play a game that has shown no respect to them during these times.

One other important note is that the MLB discussed extending the playoffs in order to appease the player's financial needs, but how on Earth are they going to finagle their way around the TV deals they have with certain networks? Are they going to try to schedule these playoff games on FOX, CBS, and ESPN, who will likely be airing NFL and NBA games at the time? So much needs to happen from many different ends of the stick for this season to occur. It's not looking good, folks.

Is there any hope we have a season?

At the end of the day, if there is no season, everyone loses. Those prorated salaries go from something to NOTHING. The MLB loses money, as they can kiss TV deals, ticket sales, and merchandise goodbye for the year. For a lack of a better word, both sides would be SCREWED. This could tarnish the relationship between the MLB and the MLBPA for a long time. Do I think there is a possibility we see baseball? Yes. However, many players have voiced their concerns and rebuttals towards the offers made by the MLB, so it's going to take a lot of compromising. One thing that is very important to note is that even if the players can't come to an agreement, the MLB Commissioner has the right to impose a 50-game season even without the approval of the players. Will this look terrible on him? Yes. Could his reputation get much worse at this point? No.

previous
The 2020 NBA Playoffs: Sleepers and Contenders
next
The Biggest Fight In The World (Pt. 2)