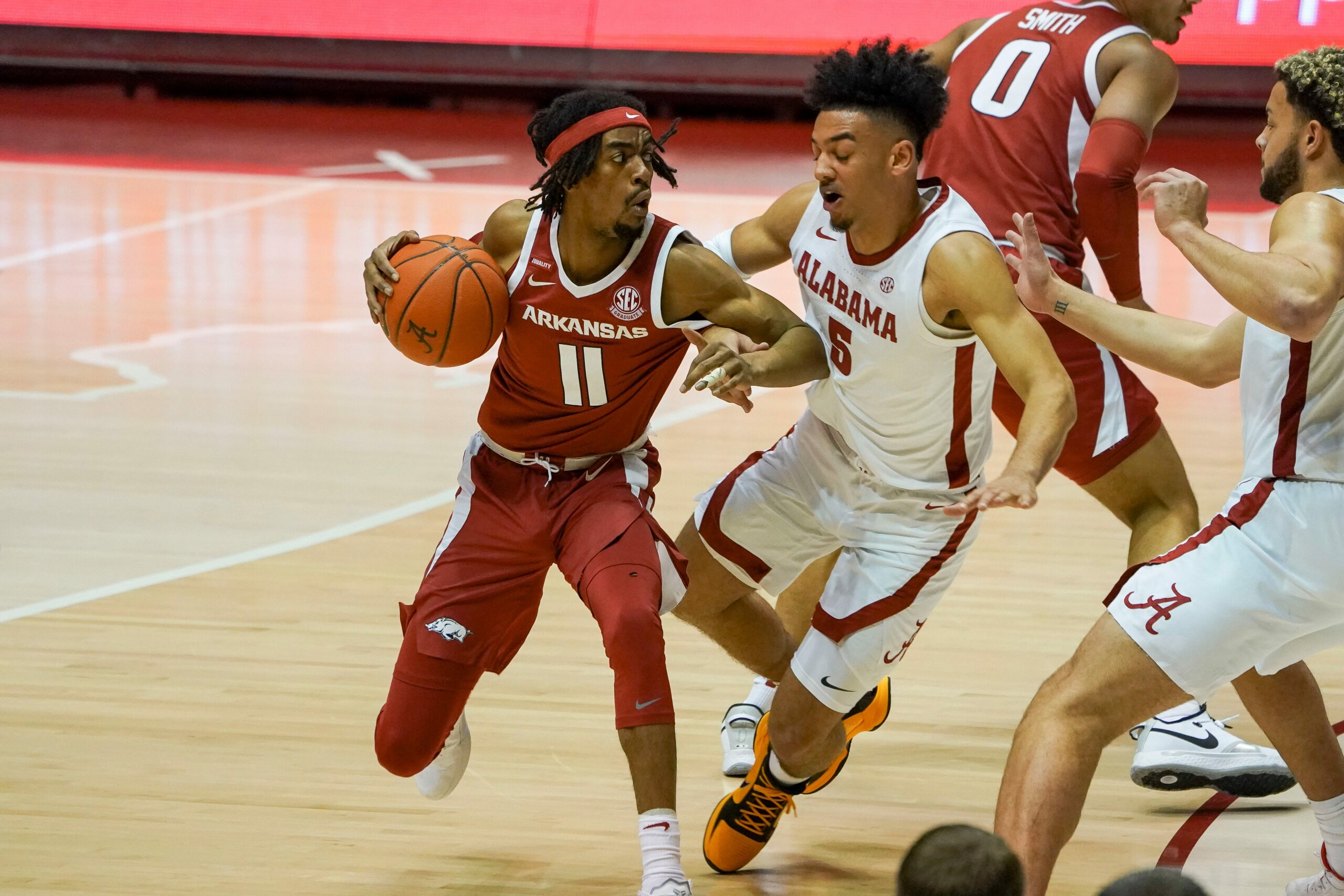 Not a ton of great matchups in college basketball tonight, but we’ll be betting on the best one of the night. We’ll start with an SEC matchup between the Alabama Crimson Tide and Arkansas Razorbacks. Then we have an ACC matchup between the Florida State Seminoles and Miami Hurricanes.

#6 Alabama heads to Arkansas to take on the #20 Razorbacks. Alabama is currently a 2-seed according to the latest Bracketology, and I’m here to make the bold claim that they go down tonight!

Okay, maybe it’s not that bold since they are underdogs tonight, but I’m rocking with Arkansas on the moneyline tonight in what I think will be a close one.

These two teams played back in mid-January, and it was a good old-fashioned shellacking, with Alabama running Arkansas out of their home gym by 31 points. A lot has changed since then. And it apparently woke the Razorbacks up because they have won seven out of their last eight games since.

Arkansas now gets a revenge shot on their home floor, and I expect them to take full advantage. We’ve bet on Arkansas a few times this season, mostly on overs because they score the ball so well. After putting up just 59 points in their first matchup, their lowest point total of the season, I think their focus will be on playing their own game and getting a lot closer to their average of 82.5 PPG.

Aside from just the narrative piece, I think that Arkansas matchups up with Alabama much better than their first game would indicate. Both teams rebound well, pass well, and can outscore just about any opponent they face. This game could and should be a punch-for-punch battle that could very well be decided by who has the last possession.

Arkansas is also a different team at home than they are on the road. Just 4-4 away from their home floor, they are 13-1 at home. And this is a massive home game for them. They will be extremely amped up for this game and have a chance to not only help their own tournament seeding case but put a large blemish on the resume of one of their conference rivals.

Sit back and enjoy this game tonight. I think it will be one of the better ones of the season between two teams that you probably don’t get to watch too often.

This game shouldn’t prove to be as exciting as the one I talked about before it. But it does feature one of the country’s better teams in FSU, who are taking on an inferior Miami team.

FSU is favored by 11.5 points in this one, and as I’ve discussed a few times in recent posts, I think a number like this scare off a fair number of bettors, as silly as that may sound to some. I’m here to advocate for betting on large favorites (when appropriate)!

This has all the makings of a large victory to me. FSU, while not playing their best basketball as of late, has still won their past three games, even though they have only covered one of them (one loss, one push). They have won eight of their past nine games, with five of those being by double digits. One of those double-digit wins came against Miami about a month ago.

Now you may think I’m a hypocrite for not labeling this as a revenge game after talking about how it is one for Arkansas in a similar scenario. There is one main difference – Arkansas is a good team, Miami is not. They've been playing uninspired basketball over the past month, losing seven of their last eight, including their last three.

They are not ranked inside the top 100 in any real major category. They score just 66.1 PPG, have an average scoring margin of -4.8, and shoot poor percentages from everywhere on the floor. Meanwhile, the team they are hosting is just about the opposite of that in every sense. The Seminoles can score, rebound, and play defense, and I think they are too much for Miami to handle tonight.

Sometimes you can play the revenge game angle. But other times you have to look at the two teams side by side and just compare them. I think this is a case of one just being far better than the other.

previous
Zach to the Rack NBA Picks For Wednesday 2/24/2021 Action
next
Action Jackson Gambling Diary Vol. 7: How to Leverage Promotions to Mitigate Your Losses