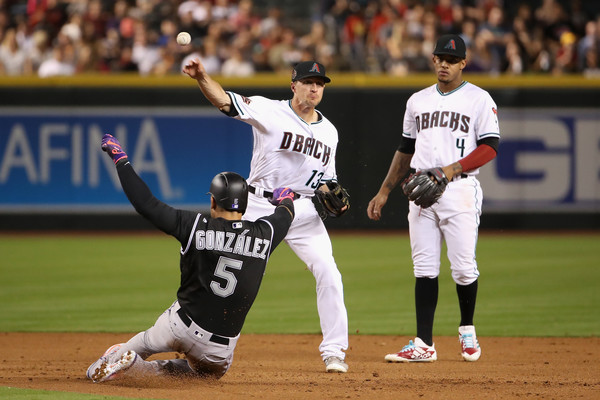 The Cardinals are the latest team to get hit with an outbreak of COVID-19. But the baseball season continues to press on without them. We have 10 games on the schedule Monday, leaving us with plenty of wagers to consider. I’ll try to improve on my MLB picks season record of 15-7-1 with four more wagers that could prove to be profitable.

Don’t look now, but the Rockies have the lead in the NL West. In fact, their 11-4 record has left them with the third-highest winning percentage in baseball. Their lineup has once again been productive, averaging 5.3 runs per contest. What’s more surprising is that they have only allowed an average of 3.3 runs per contest despite playing seven of their games at Coors Field.

They’ll look to keep their hot start rolling against the Diamondbacks, who sit at the bottom of the division at 6-10. They have a -29 run differential, which is the third-worst mark in baseball. Starting for the Rockies will be Jon Gray, who has recorded an ERA of 3.84 or lower in two of the last three seasons despite his hitter-friendly home park. Look for the Rockies to continue their winning ways in this matchup.

Another reason why I like the Rockies to emerge victorious is that Robbie Ray will be on the mound for the Diamondbacks. He’s been awful across his first three outings, allowing 14 runs across 13 1/3 innings. And he’s generally had trouble keeping runners off base given his career 1.36 WHIP. He’s also allowed at least 1.4 HR/9 in both of the last two seasons, which could end up leading to a disastrous outing at Coors Field. For the second of our MLB picks, I’m adding to the Rockies' moneyline by also taking the over on their runs scored.

The White Sox have done an excellent job building their lineup. They have a couple of proven veterans in Jose Abreu and Yasmani Grandal to go along with exciting youngsters Yoan Moncada, Luis Robert, and Eloy Jiménez. They even added Edwin Encarnación and Nomar Mazara to help lengthen their lineup. On the downside, they aren’t exactly healthy right now. Both Tim Anderson (groin) and Nick Madrigal (shoulder) are on the IL, while Encarnación (shoulder) has missed five straight contests.

Despite their injuries, they have a favorable chance to score in bunches in this contest. The Tigers will be starting Michael Fulmer, who is not an overpowering pitcher based on his 18.9 percent strikeout rate. He also probably won’t be able to throw many pitches in this contest considering he hasn’t pitched in 13 days. Even in his first start of the season, he only threw 2 2/3 innings. The White Sox have an excellent opportunity to put up runs against him and the Tigers’ bullpen.

For the final of my MLB picks, we turn to a player bet. Corbin has become an excellent source for strikeouts, recording a strikeout rate of at least 28.5 percent in both of the last two seasons. He has carried that over in 2020, recording exactly eight strikeouts in both of his first two outings. That included a start against the Mets, who have tied for the seventh-most strikeouts in baseball. I expect him to thrive in their rematch, especially given that he registered a whopping 39.7 percent strikeout rate against left-handed hitters last season. The Mets have a lot of left-handed hitters who are regularly in their starting lineup, including Jeff McNeil, Michael Conforto, Dominic Smith, and Brandon Nimmo.