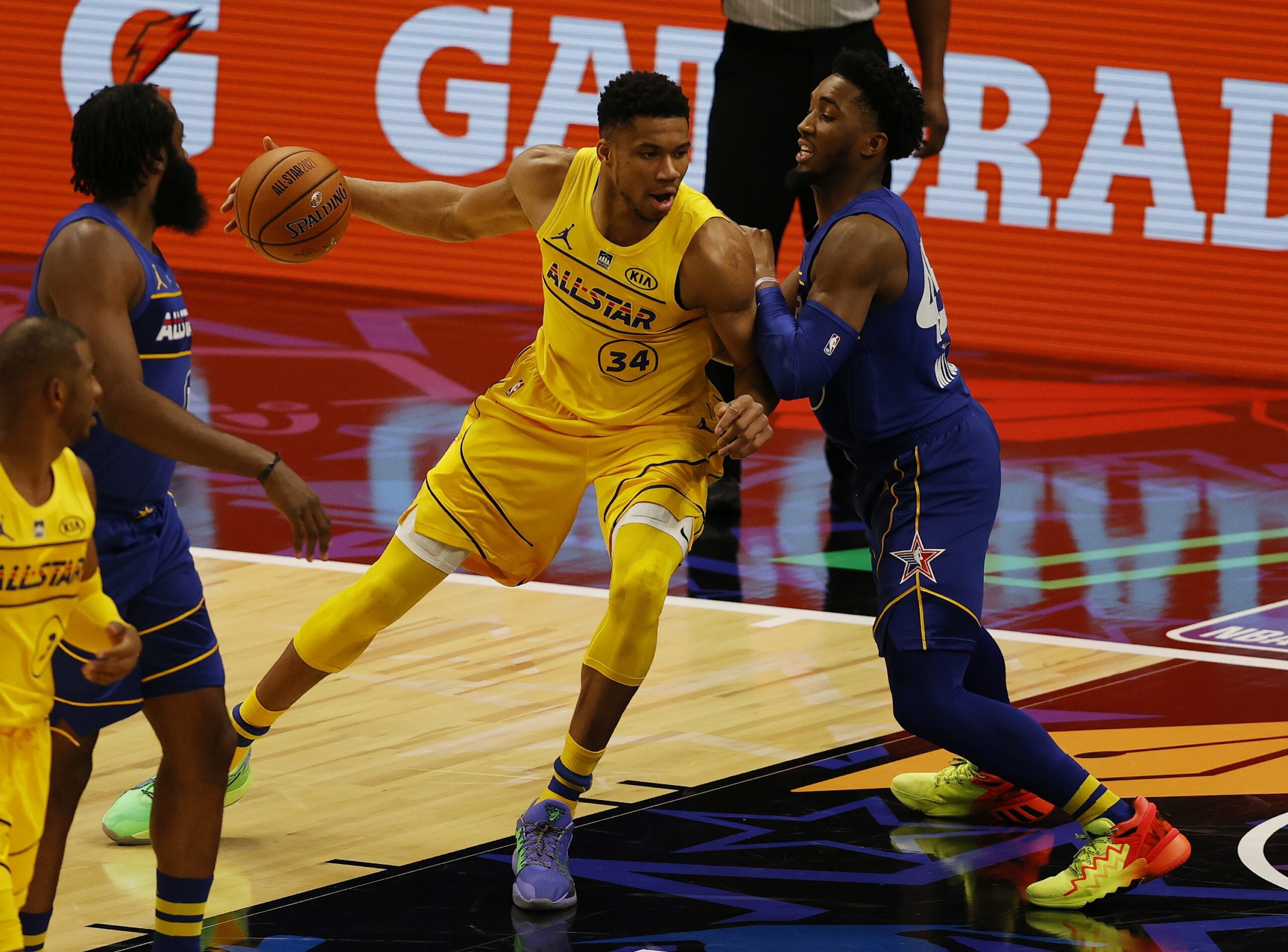 The NBA elite rolled into the ATL Sunday for what is usually one of the most exciting times in any NBA season. But of course, this All-Star Weekend was a heck of a lot different than any of them in the past. The road to even GETTING this 2021 NBA All-Star Game off the ground was bumpier than Zion Williamson’s razor burn neck rash. COVID protocols, injuries, snubs, and player replacements threatened to derail this game from the minute it was announced.

All-Star Weekend – which was really just “All-Star Sunday” this year – kicked off with the most entertaining “competitive team picking” ever broadcast on television, with LeBron and KD going head-to-head like two kids on a schoolyard picking their squads. It was actually fascinating to watch, trying to guess who each superstar would pick next. (Wait – KD wasn’t playing and he STILL went second?) LeBron had nicknames and jokes for players and showed why he is still the best personality in the NBA at age 36.

And then, at the end, only two players remained… Donovan Mitchell and Rudy Gobert. NBA social media jumped to assume that LeBron was shading their franchise, but of course, he wasn’t. He just understood that Luka and Giannis and Steph were probably better picks. And then, NBA veteran Vernon Maxwell, no stranger to taking jabs at the Utah Jazz, went after them once more posting a photo of only Gobert’s and Mitchell’s name left on the pick board.

In case you missed it for the Oprah interview with Meghan and Prince Harry, here’s what went down:

The night started with the three-point contest and, in my opinion, the return of Steph Curry as just one of the greatest players on the planet. His popularity was so high when he first started bringing hardware and attention to Golden State that he almost got too popular for his own good. It got to the point where fans started shading Curry. His shoe line sales have been slow. His jersey sales, which used to be consistently in the top three, now sit below LeBron, Luka, and LaMelo’s. And nobody on the playground is yelling “CURRY” when they shoot three-pointers anymore. Now, after Steph’s dominant showing Sunday, I think he might start to see a second popularity spike in his game.

After watching him win the three-point contest over Mike Conley with ease and then effortlessly shooting 50-foot in-game threes, I think Steph is poised to get back to being one of the NBA’s most loved players. BUT, three-point shooting has become so routine, that this contest has all but lost its allure for me. The fact that we have come to a point in the NBA when positionless players who are over 7 feet are bombing threes with remarkable consistency has dulled this event, and Zach LaVine’s first round was so ugly it looked like that Yeezy 450 white shoe that sold out in under one minute on Friday.

Curry and Conley in a Long-Distance Shootout

With Curry and Tatum in the field, at least it had some star power. And the long-distance shootout got exciting when Curry and Conley went neck-in-neck in a battle that came down to the final rack when Curry, the NBA’s current holder of the most three-pointers hit this season, buried his final two balls on the rack to take home his second Three-Point Contest trophy.

Best line of the night was Reggie Miller asking Steph if he pulled a Larry Bird and arrived in the locker room to say, “Which one of you guys is shooting for second place?”

No Zion Williamson. No Zach LaVine. And no Aaron Gordon. No player that has scored more than like 10 points in an NBA game in their careers. One guy, Cassius Stanley, has never even dunked in an NBA game. The field of dunk contestants was NOT exactly exciting, not to mention, it was sadly anemic. Three competitors? How did this happen? Has the dunk contest been “Dr. Seussed?” – Meaning CANCELLED?

What happened to the day when stars treated this thing like it was the ultimate athletic feat and accomplishment? Do you think Michael Jordan would’ve been selling shoes the way he did if he hadn’t murdered rims in ’87 and ’88? Dominique? Even Kobe demanded that he participate back when he was a rookie and promptly won the damn thing – even though his jams don’t register as all that impressive all these years later. So, where were the stars? Where was Zion? Shit, where was LaMelo? The NBA used to seek out the stars for this contest. And we all know it’s never as exciting when a role player wins the dunk contest. Just participating would have upped the excitement here.

In this humble writer’s opinion, Instagram has killed the dunk contest. Human kangaroos like Nick Briz and Sl1mReaper are out-dunking NBA players with ease at the local LA Fitness. (Follow them, trust me). True story: I did a commercial campaign for SBC Homecourt back in 2005 and I went to Slam Dunk Champion Desmond Mason’s house in Milwaukee. His dunk contest trophy was collecting dust in a downstairs closet. That’s sort of where I think Anfernee Simons needs to put his because this event was lacking more fulfillment than drinking a case of the contest’s beer sponsor, Michelob Ultra.

Once again, Kenny Smith, Shaq, and Ernie were the best part of the dunk contest, bringing up great moments from the past, joking with each other, and declaring every dunk a “ten.” I’ll never get sick of those guys, but to be honest, the Curry in-game alley-oop dunk in the first half was more exciting. I felt bad for Cassius Stanley, who according to Kenny Smith had been dreaming about the NBA dunk contest since he was a kid. I had money on Stanley winning, but I should have put money on all of the fans losing.

Yeah, all right, Simons "almost" kissed the rim, channeled T-Mac and Obi Toppin jumped over his dad, but it was probably the worst dunk contest in a very long time. Bottom line is that I can jump over my own father, too. Then again, he’s 5’4”.

I miss days when huge personalities like Shaq would bring a different type of specialty shoe to the game, like he did with that Shaq shoe phone, the light-up Shaq shoes that made Gary Payton laugh, and ultimately the Shaq slot machine shoe that Vince Carter lost 75 cents in. That was fun. This wasn’t that fun.

Of course, Steph Curry started us off with a maddening flurry of three-pointers in the first half, including two from the ALL-STAR logo and one from half-court, had the alley-oop dunk, and then threw one to Chris Paul and gave us one of those Steph “shoot and turn away” corner threes. But it was just… slow. Team LeBron was so much better lineup-wise (injuries and that dumb-ass 76ers COVID-exposed barber) and easily won the first three quarters.

The Mike Conley-Chris Paul second-quarter jump ball was possibly the funniest moment of the night, as both guards had obviously never jumped for a ball in their careers. And the game MVP Giannis didn’t miss a SHOT the entire contest. 16-16 including some of the best "mic’ed up moments" of the event. But the Shaq personalities are not really around in today’s NBA. If anything, these guys are too nice and too safe. At the end, Damian Lillard called “game” with a halfcourt nail in the coffin, and I was forced to sit through another commercial advertising the new Wipeout TV show with John Cena hosting. Zzzzzzzzzz.

The good news was that Team LeBron’s charity, the Thurgood Marshall College Fund, made a lot of money last night and that this game actually even happened. It sort of made things feel like we may be approaching going to live games again sometime soon. Then, the most entertaining thing about the 2021 NBA All-Star Game actually happened when it ended and TNT began playing that excellent documentary on the history of Inside the NBA and Shaquille O’Neal’s arrival on the show.

Overall, it was another night spent on my couch during the Coronavirus watching basketball. I didn’t care who won any of the contests. I didn’t care who won the game. And I really missed the energy of the big crowds, the dripped outfits players show off on the sidelines and trying to scout the audience for clout-chasing females looking to land themselves an All-Star. I missed guys like Quavo and 2 Chainz showing off jewelry that cost more than my entire family has made in the history of our bloodline. After all, was said and done, the best thing of the night was Giannis’ cute little baby boy in the crowd – who, if I was a betting man, should be signing a G League contract with an NBA team in the next few years.

Hopefully, he’ll have a personality like Shaq when he makes the Eastern Conference All-Star team in 2041.