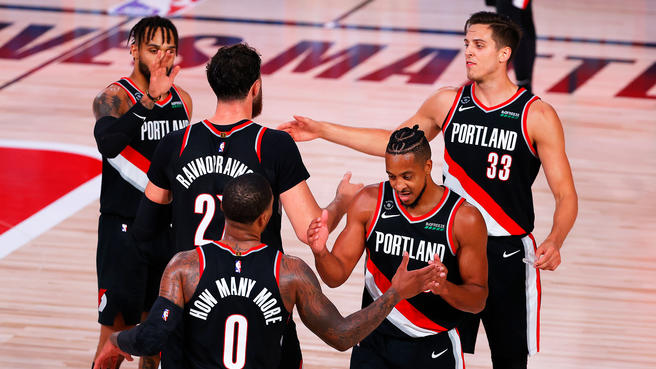 Another week in the books of amazing NBA regular season basketball. Just thinking back to a few months ago, I did not think we would see basketball again this year, and now we are enjoying some of the best NBA competition in recent memory. We have overtime games, 50 burgers, and Instagram beef. What else could you possibly ask for?

With many teams already knowing their fate, I have managed expectations for what is to come this week. Yes, I think we will still get our fix of excitement and meaningful games. On the other hand, I think we will see a lot of rested starts and waves of the white flag. The NBA regular season officially comes to an end on Friday, and then the real fun begins. Here are a few things I’m looking at this week.

The sad reality of this week is that there isn’t really a ton left to play for in the Eastern Conference. The “never belonged in The Bubble” Wizards, to the surprise of nobody, are officially eliminated from playoff contention. They have become the butt of many jokes on Twitter after actually managing to fall behind the Charlotte Hornets in the standings. The Hornets did not make the trip to Orlando. Thankfully, the Western Conference still has a lot to be determined, so let’s focus on a few teams out West.

The Blazers are the talk of the NBA Restart thus far. They were the sexy pick to come out of the West as the 8th seed, despite having some work to do in The Bubble. They’ve gotten off to a solid start and have made a lot of noise in the process, with a heartbreaking loss against the Clippers on Saturday and a bounce-back win against Philly on Sunday that included 51 points from Damian Lillard.

They have two games remaining in their NBA regular-season schedule, Tuesday against the Mavs and Thursday against the Nets. If they win out, they are probably looking at the 8th seed. If they lose one of those games, they may be out altogether. Luckily for Portland, Dallas has already come forward and said they are resting their big guns for their Monday game against Utah. The Jazz are one of the two teams that the Mavs can actually catch for seeding in the West. If they are resting their stars in that game, you’d think that they will likely do the same in their next as well. The Nets are also confirmed to be the 7th seed in the East, so they aren’t playing for much either. All signs are pointing to the Blazers winning out, but let’s see if they can take advantage.

The other talk of The Bubble so far has been the Phoenix Suns. The Suns are 5-0 in Orlando and are on their longest win streak since 2014. Yes, you read that right. They have also covered the spread in all five of those games. They are now in contention for play-in game positioning and have three more games this week to prove they are for real.

The Suns face OKC, Philly, and Dallas to finish off their regular season. At the time of this writing, they are favored by five points against the Thunder, which makes me think that OKC may be resting some of their studs today. I already spoke about how Dallas is likely to be punting the rest of the regular season of the NBA. That just leaves Philly. The depleted Sixers do still have the incentive to try and win for seeding purposes, but even if they are giving it their all, they are so banged up that I think Phoenix can take them out. I’m curious to see if the Suns can keep it rolling this week and fight their way into the playoffs.

At this point, it’s really difficult to pinpoint which matchups will actually be worth watching this week. There are so many scenarios that can play out in which guys may be resting that it isn’t even worth trying to predict what will be a must-watch this week. My advice is just to stay along for the ride and keep up with the playoff scenarios as best you can. The good games will emerge. Instead, here is the storyline I’m looking out for.

Unlike the East, the West still has a lot to be determined in terms of actual seeding. Only three Western Conference teams within The Bubble actually know their fate as of the ending of Sunday night's games. Those teams are the Lakers (one-seed locked in), the Pelicans, and the Kings, who are both eliminated from playoff contention.

Everything from the two-seed down through the battle for the eight-seed is still up in the air. The difficult part at this point is trying to predict who actually cares. The Jazz, Thunder, and Rockets are all clumped together right now in the 4-6 seeds. The four-seed and the five-seed will, of course, play each other. The six-seed is likely looking at a matchup with the Nuggets and possibly the Clippers. Is there a team in that trio that will purposely fall back and try to lock in the six-seed? Or will they all fight for the 4 and the 5? It really depends on the matchup they are looking for as home-court advantage is out the window. I’ll be interested to see which teams give it their all this week and which don’t, as we start to see the playoff picture get painted a little more clearly.

Whether this week brings important games or meaningless ones, the beauty of having sports back is that we can gamble on these games no matter what. My advice to any gamblers is to be sure you check the injury reports before betting on anything. There are way too many teams resting players right now, and it’s important to know who's playing in each game. I’ll be back this week with some picks to share.