The Case For Bringing Back the Sky Hook to the NBA 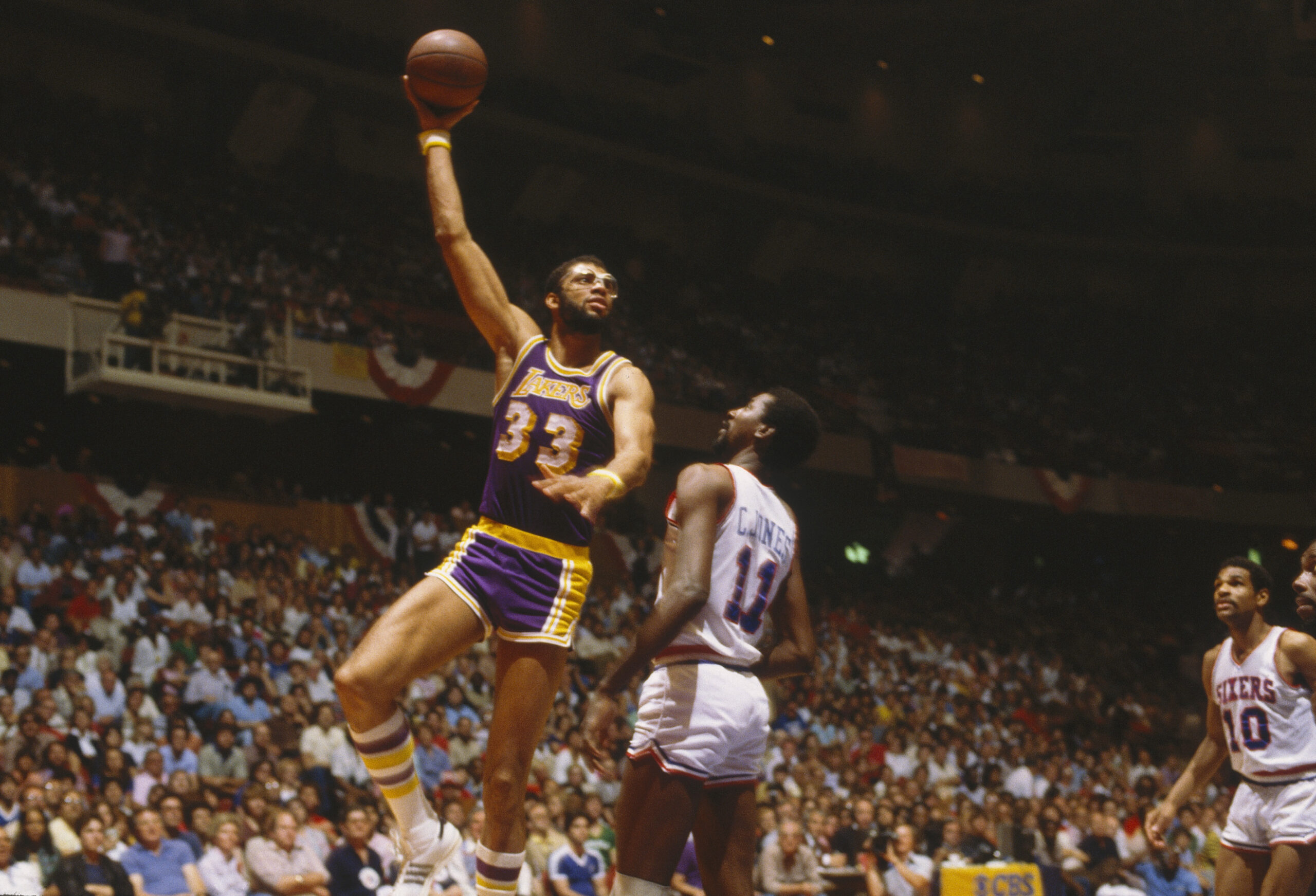 Mikan. Pettit. Russell. Chamberlain. Kareem Abdul-Jabbar... to name a few. What do these all-time NBA greats have in common? Multiple MVPs, multiple NBA championships, and… oh yeah, the hook shot.

On Friday night, LeBron James successfully buried a hook shot in a game against the Pacers and was immediately re-posted on ESPN and every social media account. The “likes” were way less than, say, that ridiculous LaMelo Ball 360 three-pointer a day later, but the results were the same (minus 1-point for the 3 vs. the 2 of course).

Still, NBA fans probably looked at that play – which, by the way, was the exact same shot that Magic Johnson hit to win the Lakers the NBA Championship over Kevin McHale in 1987 – and considered it to be LAME. The hook shot has sort of become like the controversial movie superhero Captain Marvel, who – according to comic book movie fans – is a cop-out character and was conveniently upgraded to do impossible things to suddenly make the film storylines flow easier.

So my question is: Why is nobody in the NBA embracing their inner Captain Marvel?

Every once in a while, at some LA Fitness pickup game across the country, some awkward goofy big guy pulls out a Sky Hook and buries it, causing the rest of the floor to groan in unison. It doesn’t happen very often anymore, but whenever it does, the entire air is almost sucked out of the gym. Why? Because now everybody on the floor knows that this guy will undoubtedly continue shooting this shot and ultimately give the other team 8-12 points and a W… The thing is, he won’t earn any respect from the other guys.

The reasoning is simple, although flawed: The hook shot has become very unsexy, it is considered boring, and it’s only worth, well, two points. The thing is, more often than not, the guy guarding a hook shooter is going to say, “How am I supposed to stop that?” Which is what this basketball writer is asking every young kid dreaming of a pro basketball career… Why aren’t young players learning that?

Where Did the Hook Shot Go?

LeBron is fully capable of playing another 5-8 years, especially if he adds a true hook shot to his repertoire. The way Michael Jordan’s outside shooting made him so incredible towards the end of his career, a decent hook shot could easily extend LeBron’s if his body ever starts to break down. As far as lesser post players in the NBA, if big guys like Deandre Ayton, Rudy Gobert, and James Wiseman added Kareem-like Sky Hooks in their game? They’d be borderline 25 PPG players. The closest I’ve seen to the hook shot in the NBA right now belongs to Nikola Jokić, who smartly works on his baby hook before games all the time and has hit some GORGEOUS hooks, but Jokić’s hooks are basically “Baby jump hooks.”

Do yourself a favor and go watch the 1988 Crush Soda basketball videos hosted by Kareem where he virtually calls the hook shot out of style, but “unguardable.”

I’m sorry. “Unguardable” is never out of style. It’s just an old school move that has been forgotten to time – but is dying for a miraculous comeback.

Kareem stresses three things in learning your hook shot in the video – form, footwork, and finesse. It’s a master class in the hook shot… and seemingly one that nobody in the next generation of basketball players ever watched. We all know why. Michael Jordan. Dunks. High flyers… and the three-pointer all but eliminating the dominant post player in the NBA. For me, this all changed when Dirk Nowitzki showed up at 7 feet and started draining 30-footers. The game was extended, Steph Curry perfected it, and now if you can’t hit a three in the NBA, your career won’t last too long.

But I still wonder why nobody is developing the Kareem Sky Hook. If I’m a borderline NBA player, shuffling in and out of the starting lineup, the G League, or even overseas, I would look to what could make my game more dominant. Like a video game cheat code. Eventually, I would decide that the hook shot is my way in. And I would work on that like it was my first car’s engine in high school. Watching a TV show like the genius Last Chance U on Netflix yesterday and seeing Division I-level players stuck at the JuCo poverty level, I wondered why none of these guys were out working on their “form, footwork, and finesse.” The HOOK SHOT is there for anybody to rediscover. It just needs to have one vessel to successfully complete the shot’s comeback destiny.

History of the Hook Shot

The first hook shot ever attempted was apparently in Eurobasket 1937 by Pranas Talzūnas. The man who the credit should truly go to, however, is Harlem Globetrotter showman Goose Tatum, who was so accurate and devastating with his hook shot that he often shot it without even looking at the basket. Tatum’s shot was so mechanical, he knew it was going in every time. Watch (if you can find – it the Bill Cosby interviews may have affected its shelf life) the ESPN Films Goose special and marvel at this wonderful basketball magician who would shoot the hook from three-point land and make it 9 times out of 10. Think about that. If someone in today’s NBA could figure out a hook-shot three-pointer? Forget it. First ticket Hall of Famer.

You really have to see it to believe it.

After Goose Tatum’s popularity got big, the centers of the world began developing their hook shots, beginning with George Mikan back in the 1940s. For the next three decades, it was a staple in the game. Post players needed to have one, and nobody was better than Kareem Abdul-Jabbar. Who, by the way, played until he was 42 and – oh yeah – is the NBA’s all-time leading scorer.

The Hook Shot in Today’s Game

On rare occasions, you see a player try to bring the shot back. But it always seems to go the way of the granny-style free throw. Cute, but why? Michigan Wolverines point guard and current G League player Zavier Simpson earned the nickname “Captain Hook” during his junior and senior years for his accurate running hook and use of the backboard. Some of his moves are so exciting, they have the bench erupting behind him as he shakes off a defender and finishes with a hook shot kiss off the window. Simpson became so popular that, for a small window there, the hook looked to have some comeback potential. Until Simpson ended up in the G League and has not seen a minute of NBA run. Most likely because, as Kareem said in a recent NBA interview – it’s “not worth three points.”

So. Are you better as a young big man spending hours in the gym working on your three-ball? Or on your hook shot? Would NBA executives rather have Anthony Davis, who can light it up from deep? Or another Yao Ming? I think the answer once again lies in the fabric of today’s “five positionless players around the perimeter looking to shoot a triple” NBA. And even though Kareem said, “If you get close to the basket, a lot more of your shots will go in,” it just doesn’t translate right now to the current game. Still, I can’t help but look at Kareem’s career and argue that, perhaps, somewhere a big man is going to come out of nowhere with a Sky Hook so devastating that numbers like Kareem’s may suddenly seem attainable.

Unguardable is Never Out of Style

By the way, I’m not sure how this turned into a Kareem article, but ultimately, why is this guy never brought up in those exhausting MJ vs. LeBron GOAT conversations? Maybe if we had YouTube back then, folks would be looking at this argument differently, but there is no denying that the Sky Hook was about as fluid and perfect of a basketball shot as you will ever see. Just watch the Goose Tatum special and witness what could be possible.

After all, “Unguardable” is never out of style...