What Will Be This Year’s Defining NBA Finals Moments? 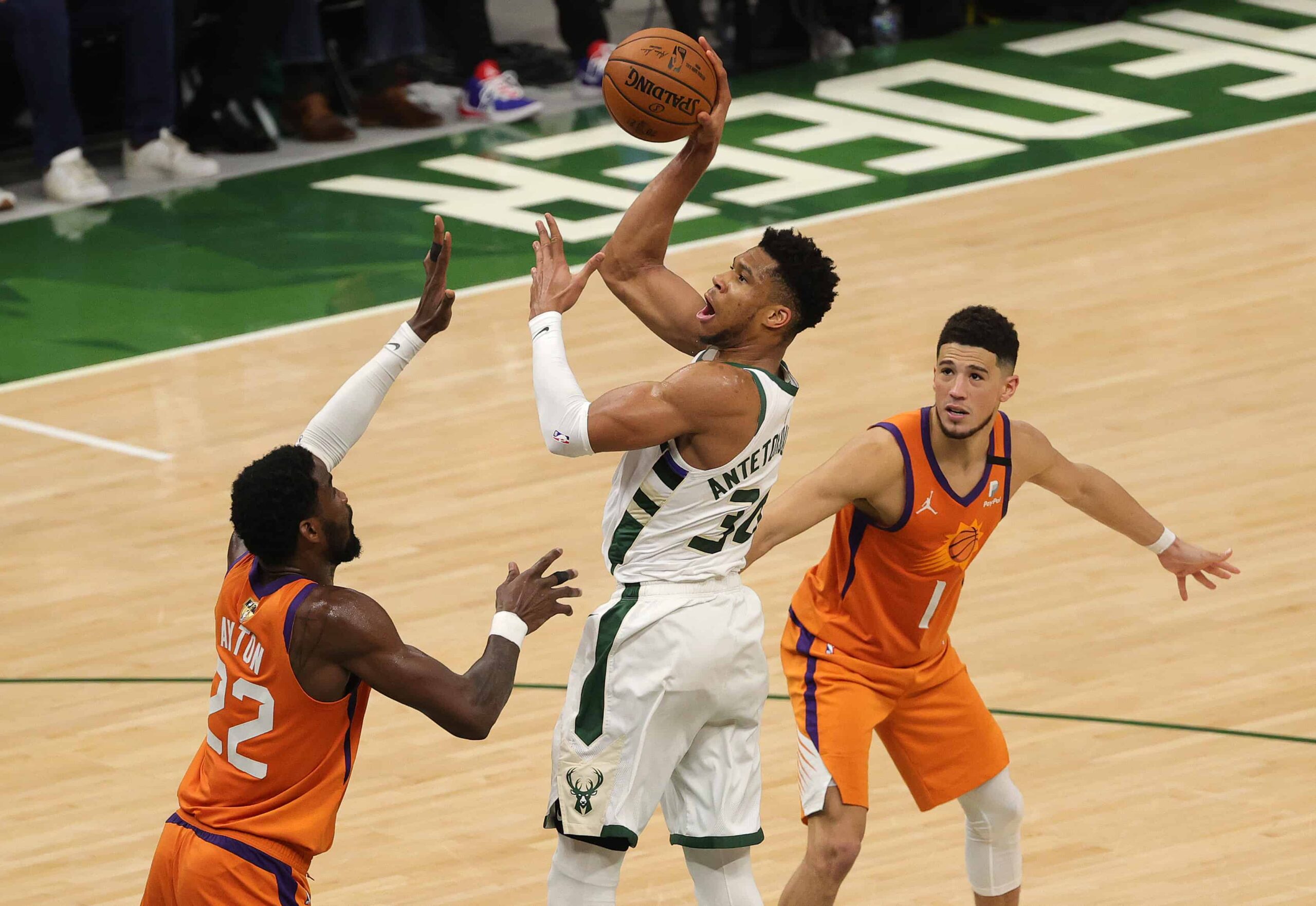 When Giannis Antetekounmpo dropped down from the top of the key to defend Deandre Ayton from finishing Devin Booker’s lob at a crucial moment in Game 4 of the NBA Finals last week, nobody could believe what they just witnessed. [embed]https://www.youtube.com/watch?v=b4-Hi4MeYMY[/embed] The two-time MVP managed to go from the top of the key to the rim in essentially two steps, time Ayton’s dunk attempt perfectly, and reject the big man cleanly, eliciting oohs and aahs from anybody who has ever spent time watching an NBA game. The rejection was so severe, it pretty much killed the Suns’ confidence, and they had nothing left in the tank once Ayton got memorialized at the rim.

The Greatest NBA Finals Moments Ever

Rewatching this block over and over, I have no doubt that it will become one of the most spectacular plays we have seen not only in the NBA Finals this year but in NBA history. Since that block, Ayton has played timidly. The Suns are not running that play as consistently as they did all year. Giannis and Middleton have been all-world. And the entire momentum of the Finals has shifted in Milwaukee’s favor. Giannis said, “It’s incredible what your body is [able] to do. When you think about winning, you go to the extreme. I cannot explain the play.” Bucks player Pat Connaughton called it “The greatest block of all time.” NBA Twitter shared similar thoughts as the night wore on. But the argument quickly popped up everywhere: Is the Giannis block even the greatest block in NBA Finals history?

No. That distinction still belongs to LeBron James when he chased down Andre Iguodala in 2016. Here it is, from every conceivable angle. [embed]https://www.youtube.com/watch?v=-zd62MxKXp8[/embed] Why was this the greatest of all time? Well, that race-from-behind masterpiece shifted the momentum of GAME 7, and the Warriors crowd all but disappeared. A minute later when Kyrie Irving’s three-pointer ended the Warriors, Cleveland had an NBA Championship. And LeBron even did it while wearing one of those weird 2016 t-shirt jerseys. So, as history has proven, unless Milwaukee wins it all tomorrow night, the Giannis block will be important, impressive, and sensational… but it will not be considered the greatest ever. Unless Milwaukee wins. Like LeBron’s block – which has come to be known as simply “THE BLOCK” – Giannis all but squashed the Suns’ offensive production with his play. However, there is still a strong chance that Phoenix is able to recover in Games 6 and 7 and win these Finals. Should that happen, “The Giannis Block” will be remembered as surely impressive, but not quite as legendary. Because those types of plays have happened in EVERY major sport throughout time:

You Can’t Be Legendary If You Don’t Win

Unbeknownst to many, Carlton Fisk’s Game 6 home run against the Reds in the 1975 World Series did not win the World Series for Boston. They didn’t even WIN it that year. (The Reds won the title in Game 7, but people mainly remember the Fisk “waving it fair” homer.) [embed]https://www.youtube.com/watch?v=2WRi6iZAl-I[/embed] Julius Erving’s famous windmill scoop reverse layup came against the Los Angeles Lakers in 1980. But Magic Johnson and company had the last laugh and won the championship that season. [embed]https://www.youtube.com/watch?v=NjdEP7I2fRA[/embed] Thurman Thomas rushed for 135 yards, had a TD, and caught 5 passes in Super Bowl XXV. But the Bills lost Super Bowl XXV because kicker Scott Norwood missed a 47-yard game-winning field goal as time expired. (Yes, Ray Finkle from Ace Ventura’s entire character was based on this gut-wrenching event. This was the play people remember from this game.) “Wide Right” became a household saying that year. [embed]https://www.youtube.com/watch?v=GVRNJnJt6hk[/embed] And it goes on and on. Plays get remembered, but unless you win it all, they’re just “part of the past,” as Giannis said when he claimed he would not rewatch the highlight of his block because he was staying focused on Game 5.

And what happened in Game 5? Defensive superstar Jrue Holiday ripped the basketball away from Devin Booker, took it down-court, and threw Giannis a career-defining alley-oop that is SO brilliant to watch in slow motion that it may have even trumped Giannis’ block in Game 4… (I can’t imagine what that play is going to sell for on NBA Top Shot.) Amazingly enough, both of these plays are anchored in defense… which once again proves that “Defense wins Championships.” [embed]https://www.youtube.com/watch?v=y6Kyho7TPyY[/embed] Unless the Bucks don’t win it all of course, then these plays will just be sensational highlights from a disappointing year. Let’s take a look at some of the other great NBA Finals plays that match up with Lebron’s block in 2016 that all came from winning teams…

Most Legendary NBA Finals Moments of All Time

[embed]https://www.youtube.com/watch?v=IiSdb16N_Dg[/embed] MJ made this jaw-dropping play over A.C. Green and ushered in the Jordan era with his first title. The play was so ridiculous it didn’t even make gravitational sense. And back then you had to wait two hours to see it again on SportsCenter. There WAS no Instagram account showing it 40 times from different angles.

The debate on whether Jordan “pushed off” still rages today. [embed]https://www.youtube.com/watch?v=vyL0FxS-F6E[/embed] Back then, a lot of us were all sick of Michael Jordan because he beat so many other great players so often, but this shot was so clutch, kids are still trying this move on playgrounds.

[embed]https://www.youtube.com/watch?v=tr6XsZVb-ZE[/embed] This would eventually lead to LeBron’s first title and cement Allen’s legacy as one of the greatest shooters of all time.

After being labeled as “doubtful” with a torn thigh muscle, Reed showed up and scored the first two buckets of the game to defeat the Lakers and electrify New York City with a Knicks championship. [embed]https://www.youtube.com/watch?v=SeITaf3e2Uo[/embed]

Before a legendary announcing career, Celtics great Johnny Havlicek secured Game 7 for the Celtics in the 1965 NBA Finals with defensive wizardry. [embed]https://www.youtube.com/watch?v=J4fTjcJwImw[/embed]

What Will This Year’s Moment Be?

Already in this Finals, we have the Giannis block and the Holiday steal/Giannis alley-oop. Who is to say what we might see in Game 6? Assuming the Suns come to play here, we may even have two more games to see what could REALLY join the aforementioned plays listed above. But you have to win, and nobody will tell you that more than the players themselves. After all, the highlights get the likes and the views, but the championship gets you the respect that you dream of as a child playing basketball in your driveway. Giannis and Holiday wouldn’t think twice about trading away those two plays for a title any day of the week. So what will become the defining moments of these NBA Finals? If the Bucks close this out, there is no doubt that those two plays enter the pantheon of Top 20 NBA Finals Moments of all time. But who is to say Devin Booker or Chris Paul doesn’t have something better up their sleeve? Could some Mikal Bridges game-winner become the moment everybody talks about in the off-season? That, my friends, is the beauty of basketball, you never know when you will be able to have the opportunity to become the hero. You just have to be willing to let your body do incredible things…