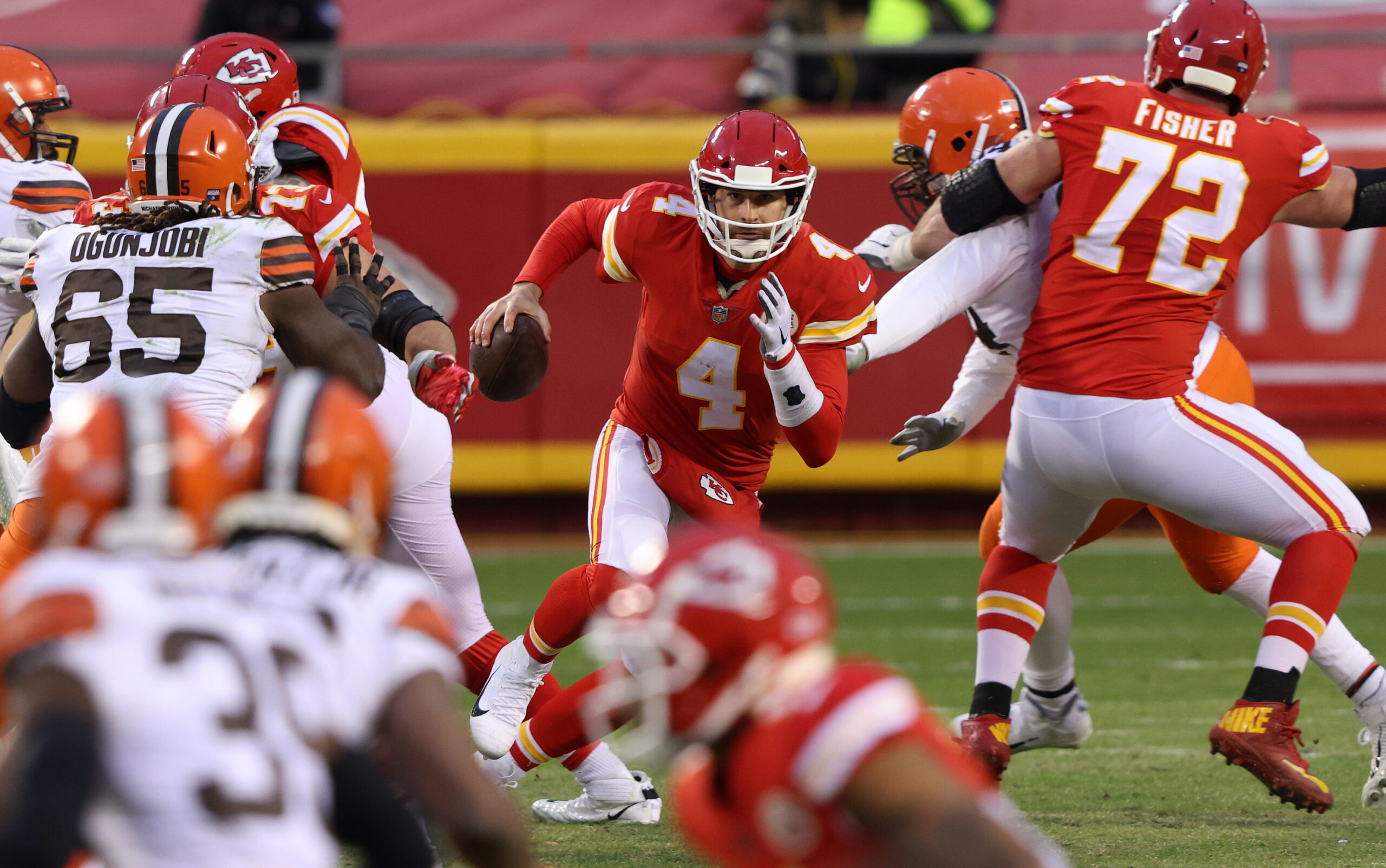 The Divisional Round of the NFL playoffs wrapped up last night, and besides Tampa Bay’s win over the Saints, all the favorites won outright. While both favorites on Saturday covered the spread quite easily (both games were decided by 14 points), the Sunday games were a bit more competitive, as the underdogs cleared the spread in both contests. The biggest story was the key injuries to quarterbacks mid-game that may have changed the outcome and could hold future ramifications for this week’s championship games.

Let's take a deeper dive on the NFL Divisional Round and how it played out.

It was like Matt LaFleur wanted to showcase every offensive weapon he had Saturday. Despite facing off against a tough Rams defense, the Packers dominated the entire game. Rodgers looked like the MVP we all voted for as he scored two touchdowns through the air and scampered for another one on a designed bootleg. The lovefest between Rodgers and top option Adams continued as they connected for yet another touchdown, making this the 5th one in the last three games. The Packers’ backfield was on full display as both Jones and Williams combined for 26 carries and over 150 yards. It seems like the running back by committee situation they’re deploying this year is working. By having a near 50/50 split, Jones can stay healthy throughout the game.

The Rams, on the other hand, were not so great. Injuries were the biggest issue coming into this game, and it showed. Goff did have a decent game stat-wise, but he struggled mightily without his top receiver, Cooper Kupp. His average per pass attempt was just six yards, and his longest passing completion was 28 yards. It was obvious that the hope was to lean on Akers and the defense. Whenever Goff did drop back to pass, he was constantly under pressure. This pressure eventually got to him and he was sacked a season-high four times. The Packers host Brady and the Bucs at Lambeau next week, where the weather could be an important factor.

The Bills recognized the way to slay this monster of a rushing attack is by decapitating the head – Lamar Jackson. The first blow was a 101-yard pick-six from Taron Johnson, and the second was a hard hit Lamar took to the head as he collided with the ground. Once he was ruled out, the Bills were able to close the game out with ease. It’s another disappointing playoff run for the Ravens. Despite leading the league in team rushing over the last two years, they always seem to run out of steam in the playoffs. As for the Bills, they head to Arrowhead Stadium, to potentially face a Mahomes-less Chiefs offense.

The Browns’ Super Bowl run gets flushed down the toilet once again. The Chiefs came out methodically moving down the field, setting the tone early. The Browns could not get anything going on the ground. Hunt and Chubb failed to gain any serious traction and finished with a lowly 20 yards combined rushing yards in the first half.

The biggest storyline to come out of this game was Mahomes suffering a concussion and being ruled out. Without Mahomes, it appeared the Browns lucked out and were on the verge of mounting a comeback. That is until the high-flying, super-athletic Chad Henne sealed the game with an electrifying first-down run. Even though the Browns leave Arrowhead defeated, they do have the fact that they made it to the playoffs to hang their hat on. As for Kansas City, getting Mahomes through the concussion protocol will be the main focus for next week. If they want to have a chance to hoist the Lombardi for the second consecutive year – they need Mahomes healthy.

In a game where two Hall of Fame quarterbacks faced off, neither were able to top 200 yards passing. Both quarterbacks were off their mark, especially Brees, who threw three interceptions. Brees was vague about whether or not he planned on retiring, but Jameis Winston coming in to throw the ball down the field tells you all that you need to know about his arm strength. Both teams leaned heavily on their running backs and defense with hopes of trying to control clock and field position. It was the Bucs who succeeded in this, and by the mid-way point of the fourth quarter, Buccaneers fans were starting to celebrate.

The Saints head back to New Orleans with a lot of uncertainty surrounding their quarterback position. If they can figure it out, they still have a good chance at making a deep run next year. The Bucs head into the frigid tundra to face off against another Hall of Fame quarterback. A Super Bowl win for either of these legends will further cement them into the conversation of being the GOAT.

For a preview of next weekend, check out my Conference Championship article. Follow me on Twitter @AJGIII07, and for all other great content, check out The Odds Factory.

previous
Strip Clubs, Burner Accounts, and Flat Earthers: Will The NBA’s Latest Super Team Work?
next
How Poirer Could Beat McGregor in UFC 257