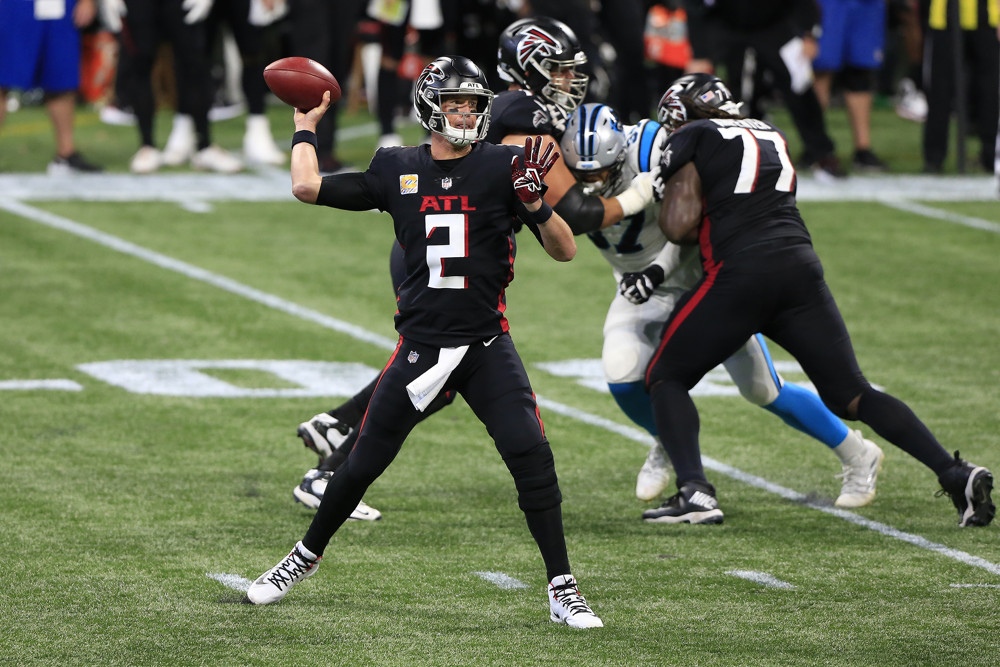 It’s already Week 8 – can you believe it? If it wasn’t for the extra game we would be halfway through the NFL season. Time flies when you're absolutely KILLING it with picks. If you’ve been tailing me all season, then you’ve got a nice stack of cash built up. With just one losing week, I’m ready to keep this money train rolling. Can I get another 3-0 sweep back-to-back weeks? Hell yeah, I can. Let’s get into my Smart Money Picks for this week.

I’ve been doing well with these under picks so I’m going to stick with them. Both the Atlanta Falcons and Carolina Panthers offenses are hit and miss, and I can see this being a ugly, low-scoring game. Darnold has regressed from his excellent start back to the pumpkin he was with the Jets. Christian McCaffrey is still out, and they don’t have a running back capable of producing the same output. Not to mention Robby Anderson has been a non-factor all season and provides no help opposite D.J. Moore.

As for the Falcons, their season has also been up and down. They do have offensive talent in Ridley, Pitts, and Patterson, but they still seem out of sync and I don’t see them getting it together this week. Another reason why I like this under is because it’s hit four of the last five times these teams have played. Lock it in. Final Score: 30-13, Falcons.

At first glance you’re probably asking yourself, “Why the hell are the Titans the underdog?” They were able to beat the Bills and basically just shutout the Chiefs. Now they’re playing a 2-4 Colts team and they’re getting points? I understand your confusion and why you might sprint to the sportsbook to bet the Titans, but don’t do it – this is a trap game. The Titans are about to play their third straight road game, and it’s against a  divisional rival. This is a huge let-down spot for Mike Vrabel and the Colts.

The Colts are better than their record suggests. They are 5-2 on the spread, and things are clicking for them. Wentz is finally looking healthy and is finding ways to move the ball down the field. While they don’t have big names like Julio Jones, A.J. Brown, or Derrick Henry, they have a well rounded offense anchored by Jonathan Taylor. This game is going to be a hard fought slug-it-out battle. I know it doesn’t feel good, but take the Colts to win. Final Score: 31-24, Colts.

Let’s wrap it up with an absolute LOCK. I love the Steelers here against the Browns. The Browns are coming off a decisive win over the Broncos, where Johnson looked like a complete stud filling in for Chubb and Hunt. Mayfield is still questionable with his shoulder, and Keenum is more than likely going to get his second start this season. The good news for the Browns is that they are getting Chubb back. The bad news is that they have to face this stout Steelers defense featuring T.J. Watt.

The Browns have two choices. Roll out a banged up Mayfield or play Keenum again. While the Browns looked good last week despite missing key players, it was against a fraudulent Broncos team. I admit that Roethlisberger doesn’t look great, but this team is loaded with offensive talent and can get out to a lead in the blink of an eye. They could attack this Browns team through the air with Diontae Johnson or grind it out with Harris. Either way, the Steelers are covering this spread. I like them so much this week I’m also going to throw a few units on the moneyline at +180.

It’s about halfway through the season, and I’m really hitting my stride with these picks. For more sports betting content follow the Bet-Tenders on Instagram, and don’t forget to follow us to stay up to date with our events out in Arizona all month.

previous
Smartest Player Prop Plays for NFL Week 8: Carson Wentz, Tua Tagovailoa, and More
next
How to Use Against The Spread (ATS) When Betting Football