What We Can Learn From Parlay Patz 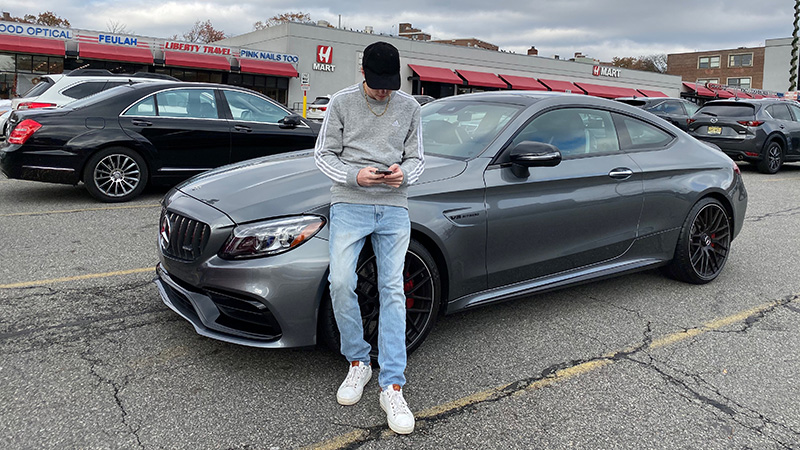 Sports gambling is a fickle beast. No matter how much research or strategy you have, there’s no such thing as a sure thing. That is, unless you were 23-year-old Ben “Parlay” Patz during the fall of 2019.

Over the course of 2 months, Patz accumulated over $1.1 million in gross winnings via parlay betting, including one stretch where he won over $463k across 4 bets in 7 days. He was even covered by Darren Rovell and had his bets featured on Action Network, catapulting him to cult figure status in the gambling world. By March 2020, his lavish life of winnings, Mercedes, and private jets to the Virgin Islands came crashing down when he turned himself in to the FBI after sending hundreds of threatening messages to athletes over social media related to gambling losses. After paying a $100,000 bail, he currently stands on trial for a 5-year jail sentence for harassment and could have to forfeit all his winnings.

There’s a lot we can learn from Parlay Patz, including but not limited to, don’t tell human beings that you’ll “sever their neck open with a dull knife” because they had one bad game. Not a great move. And while his story takes a dark turn, there are several takeaways to help you grow as a gambler (and help you not be a psycho).

Have a Consistent Parlay Strategy and Stick to It

Parlay Patz, as his name implied, had a very strict and simple strategy he would only bet parlays and moneyline favorites, mainly focusing on professional football. Here’s a quick glance at his winnings from November and December 2019, when he was at the peak of his success: 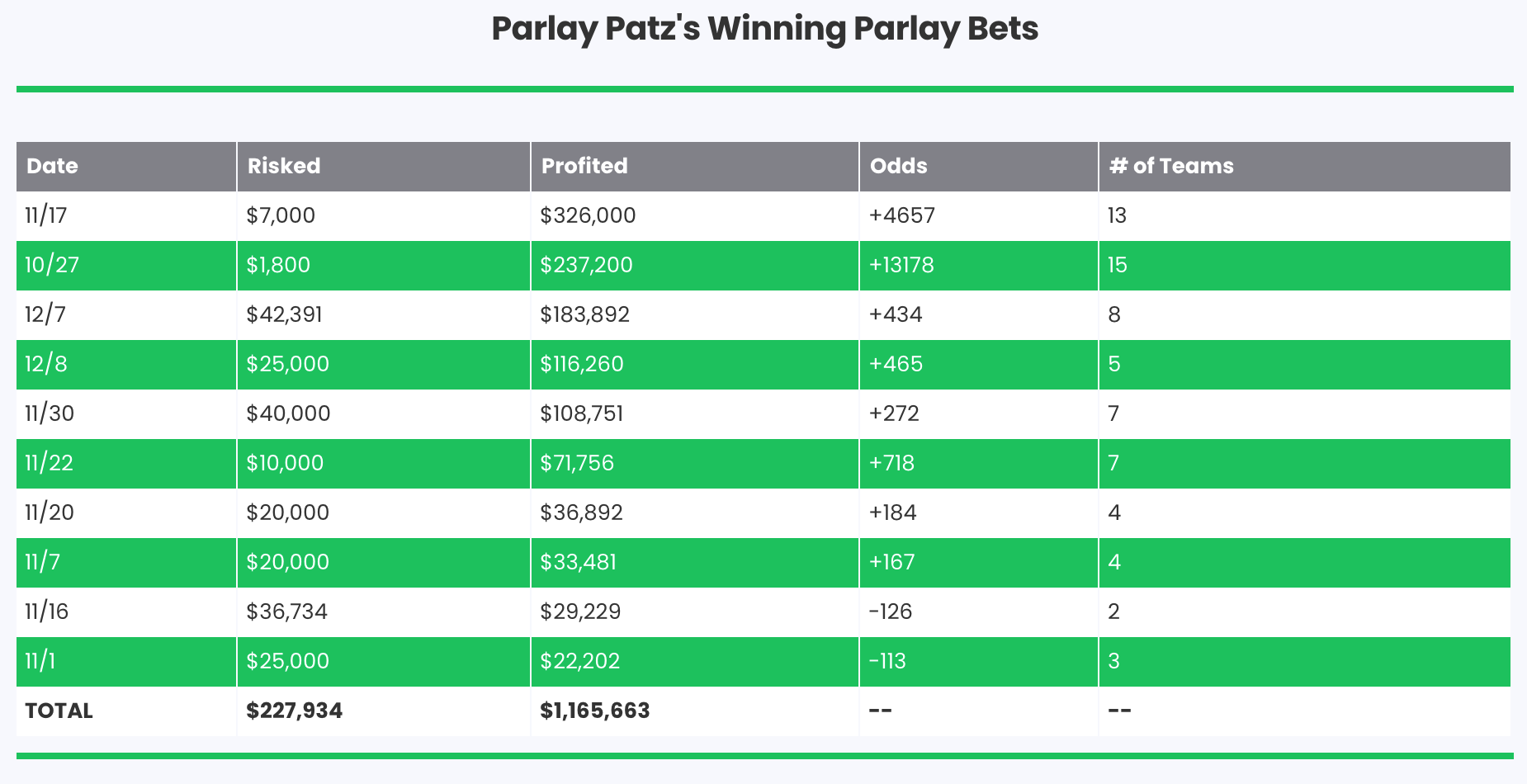 It’s important to note that this only shows his winning bets. Patz remained open about the fact that he consistently lost, as one expects when betting parlays, some of the riskiest bets. As he told Rovell in December, “Of course I lose...I don’t claim I’m better at this than anyone else.”

He knew that losses would come but did not deviate from his plan, banking that the odds and the payouts would eventually turn in his favor.

Gambling Is About Winning, Not Being Cute

Look at every message board or Reddit thread about Patz and you’ll find comments saying: “Parlay Patz isn’t a real gambler. He only bets favorites.” Ok....and? They’re the favorites for the reason, and he’s in it to make money.

This is what separates the sharps from the squares. Rather than betting on his favorite team, fun props, or every single game just to have action, Patz focused on what he knew and was comfortable with. He even claimed, “I can go days without looking at games or at scores." While it’s easier said than done, especially for avid sports fans, that kind of cool detachment is the exact kind of mentality one needs to thrive.

Patz seems like he just might have watched The Wolf of Wall Street one too many times and gotten in way too deep with the life of luxury and the high-stakes nature of parlay bets.

Every sports gambler knows that big losses are part of the game. I’ve definitely had to go on the “peanut butter and jelly for dinner diet” and consider selling my body after a few tough weeks. But hiding behind a computer screen, and (as stated in this deposition) sending over 300 messages to professional and college athletes, threatening to rape and kill them and their entire families, is clearly not the right response to some bad luck. While Patz clearly has some other issues going on, it’s important to remember that sometimes you just need to clear your head and take a walk after a tough loss instead of hitting the DMs.

Legal Sportsbooks Are Good for Everyone

One of the few winners in this situation was William Hill, the operator where Patz placed the majority of his bets. For over a year, Patz would drive from his apartment in New York City across the bridge to a gas station in Fort Lee, NJ, and place legal bets in the parking lot. As his winnings grew, William Hill and Patz developed a working relationship, assigning a dedicated agent to Patz and managing his payouts at an efficient rate.

And, more importantly, when the authorities came calling, William Hill was fully cooperative and helped build the FBI case against Patz, matching timestamps from his betting slips to threatening messages sent to athletes from his several burner accounts. This kind of cooperation simply would not be possible with a bookie or illegal offshore site.

With sports gambling is growing in popularity, athletes face more and more online hatred after bad performances – just look at the comment sections of any major athlete after a big loss. This kind of protection and cooperation from legal sportsbooks is necessary to ensure a safe future for the entire industry, from the people who play the game to the people who bet on it.

What Have We Learned From Parlay Patz?

The rise and fall of Parlay Patz is one of the wildest, strangest stories to hit the sports gambling world in recent memory. Think about it – a college kid with relatively little gambling experience would drive across the bridge to a gas station in New Jersey to place gigantic parlay bets that ended up winning at a nearly impossible rate. He made over $1 million, bought a Mercedes, chartered a plane for him and his buddies to the Virgin Islands, and became an overnight celebrity in the gambling community.

But the entire time, the kid was sending bizarre, threatening DMs to professional and college athletes, complaining about bad losses or trying to influence results by psyching players out before a big game (like that would actually work?) This kid was basically a bad wannabe-mobster who thought he could swing outcomes by sending mean texts instead of breaking someone’s thumbs. To the surprise of no one, it didn’t actually work and he has the literal FBI threatening him with 5 YEARS of jail time and gambling operators claiming his winnings may be illegitimate. Who’da thought?

So, if you find yourself winning a few big bets – go celebrate (and consider sharing some winnings with me) but maybe take a breath and remember what happened to Parlay Patz.